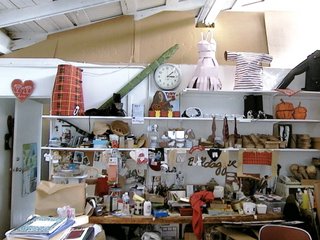 Hey! The cobbler's been pretty slow painting those pinstripes on the "wonder bread" shirt. Almost halfway done.I've got a summer concert comin' up SATURDAY JULY 15 7:30 PM @ THE 18TH ST ARTS CENTER, 1657 18TH ST, IN SANTA MONICA ,CALIFORNIA. IT'S AN OUTDOOR CONCERT IN THE PARKING LOT. BRING YER BEACH CHAIRS ETC IT'S FREE! TELL ALL YER FRIENDS! So I'll keep paintin' & now I'll be practicin' too. hoping for some fun guest stars. Am tryin' a hat on the giant ME that Alison Bechdel drew when she was here(be sure to keep posted www.dykestowatchoutfor.com). Will be gettin new camera soon so for now a little glimpse o' The Cardboard Cobbler's studio.

# posted by Phranc aka The Cardboard Cobbler @ 4:14 PM 1 comments 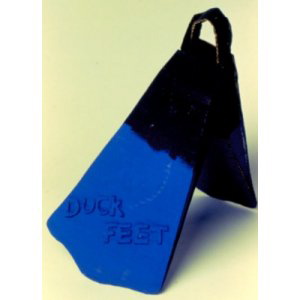 Time to get wet and read my favorite book! Every year at the start of summer I read Ray Bradbury's Dandelion Wine. These Duck Feet are an older version from early '90's.

# posted by Phranc aka The Cardboard Cobbler @ 8:39 AM 1 comments 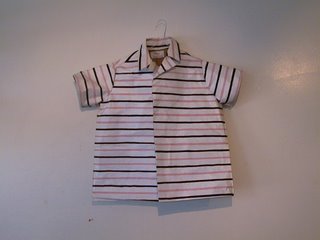 Well it was a slow day. so many resposibilities. With all the stuff I had to do only had time to paint 3 stripes and make 8 pieces o' candy! camera on the fritz too. Am posting ice cream shirt as promised.

SOOO. Spent yesterday w/ Alison Bechdel, the ultimate dyke to watch our for, in town to promote her excellent & amazing new book "Fun Home"( www.dykestowatchoutfor.com). Don't miss her fantastic powerpoint presentation ...coming to yer town soon! We worked in my studio, Alison making a lifesize cardboard cutout of me while I started on a new "wonder bread " striped shirt. We're preparing for our september show at Pine St Art gallery in Burlington VT. I'll try and post pics she took of us working ,they're up on her site now! I Woke up in the middle of the night w/ erasers, pencil boxes notebooks swirling in my head. BACK TO SCHOOL will be the Phranc of California's appropriate transition from summer to fall!

# posted by Phranc aka The Cardboard Cobbler @ 2:32 PM 2 comments 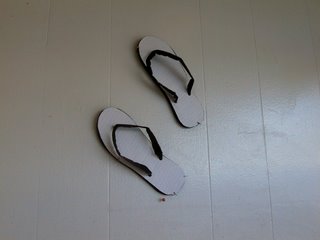 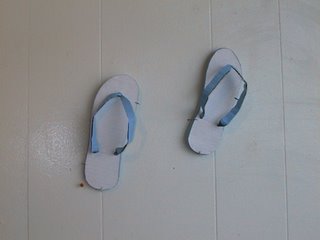 Sunday. Day away from studio. Got some more pics o' work from show. Oh did i say I sold 2 pairs of Goaheads?

# posted by Phranc aka The Cardboard Cobbler @ 2:36 PM 4 comments 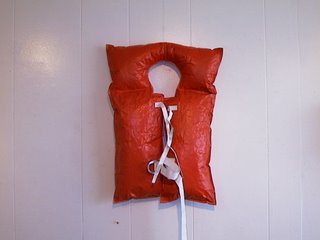 Well! Show tonight was swell! lot's o' friends showed up. I originally called the show "SWIM" but now think it should just be called "Phranc of Caifornia" my new "Label". Eastside Studio's space was perfect for the show and Johnny & Doug were faboulous and fastdious host. I feel very lucky and happy. Now on to more work! Alison Bechdel's coming to L.A. topromote her new book "Fun H.ome" next week. We will be working together on a show in September in her home state of Vermont at Liza Cowan's Pine Street gallery in Burlington. My show at Eastside Studios 4626 Hollywood Blve will be up thru June .